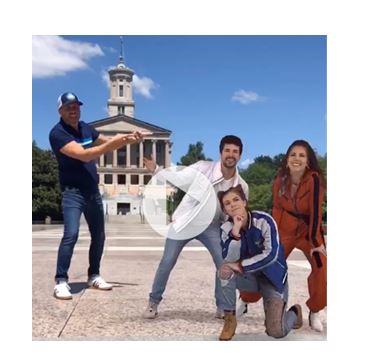 To mark the occasion, the band is collaborating with the new AR (augmented reality) app Jadu, which allows Track45 to memorialize their milestone virtually with anyone, anywhere. The cutting-edge technology allows the band to appear in the same space via holograph to celebrate with their new label family and the industry as well as fans and family!”Family is important to us, and we think the best families are all about helping each other become the very best versions of themselves. We’ve found that family with BBR,” said Track45 in a joint statement.  “They dream and believe as big as we do, and we couldn’t ask for a better creative home!”

“Family acts have a rich history in the Country Music genre. There is something special about the creative process and art born out of those shared experiences and bonds. These COVID times have reminded us more than ever, the power and importance of family as we all get back to what really matters in life. Family has once again become the nucleus of life for so many,” said Jon Loba, EVP BBR Music Group “I cannot think of a better time to introduce the incredibly talented Track45. Their production and writing is at both turns so dynamic and original, yet so familiar and relatable. They explore themes and topics we all experience, yet do so in such a unique way…in perhaps a way only three siblings who grew up creating together could. We couldn’t be more excited to have them join the BBR/BMG worldwide family and like their music, announcing their signing in a progressive new way with a hologram from our friends at Jadu.”

Track45 are managed by Missi Gallimore of T.R.U.T.H. Management and Borman Entertainment. Individually, Jenna, Ben, and KK have built their own success, upon moving to Nashville songwriting became a way of life for each member, writing two songs a day for years until they each signed individual publishing deals. Success followed with outside cuts from a diverse list of artists including Justin Timberlake, Charlie Puth, Lee Brice, HARDY, Lauren Alaina, and more.

The trio have songwriting credits on every track of their forthcoming EP and produced several cuts, but they also enlisted an elite list of creative collaborators including Grammy-winning producer Byron Gallimore. They went into the studio with demos that played like finished masters and a strong sense of what they wanted to say.