THE SHIRES PARTNER WITH CMT FOR THE PREMIERE OF THEIR “LIGHTNING STRIKES (FEAT. LAUREN ALAINA)” MUSIC VIDEO 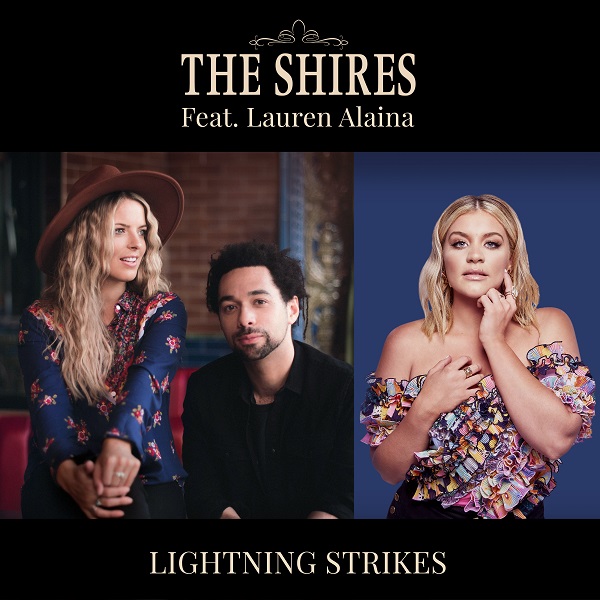 The Shires, the UK’s best-selling country act of all time – comprised of Crissie Rhodes and Ben Earle – are excited to partner with CMT for the premiere of their music video for “Lightning Strikes (feat. Lauren Alaina).” The video will premiere across CMT, CMT Music and CMT.com starting today, January 25. Watch the video online here on CMT.com.

Penned by artist Cam (Camaron Ochs), Josh Williams, and Evan Bogart, “Lightning Strikes” is an electric, tempo-driven track from The Shires’ fourth and most recent album Good Years. The duo with “spellbinding harmonies” (Billboard) collaborated with country-pop powerhouse Lauren Alaina for this version of the track that Billboard deems “infectious.” The song is about rekindling an old flame, reminiscing on the good times, and pondering if it’s possible to light the spark again. The video features all three artists and is full of soft ambiance and soft smiles.

Released in the U.S. via BBR Music Group, Good Years is the follow-up to Accidentally on Purpose and GOLD-certified albums Brave and My Universe. The project was recorded in Nashville and includes 12 new tracks, 10 of which are co-written by the duo. According to the illustrious Forbes, “every song showcases The Shires’ signature harmonies and relatable lyrics.” Produced by Lindsay Rimes (Kane Brown, Thomas Rhett, Kelsea Ballerini, LOCASH), Good Years, also features some of Nashville’s top songwriters, including Cam, Bob DiPiero and Canaan Smith. Stream Good Years at  https://TheShires.lnk.to/GoodYearsPR.

The Shires were the first-ever British act to win a coveted CMA Award when they accepted the Jeff Walker Global Artist Award celebrating outstanding achievements by a country act outside of the U.S. in 2017. Ben also received the 2020 CMA International Broadcaster Award, hosting on BBC Radio 2 (14.4 M weekly audience) while filling in for veteran broadcaster, Bob Harris. They are also the first UK country act to perform in the historic circle at the Grand Ole Opry. The Shires have opened for Little Big Town, Sam Hunt, and Shania Twain, and most recently joined Carrie Underwood’s 2019 Cry Pretty 360 Tour in their native country.