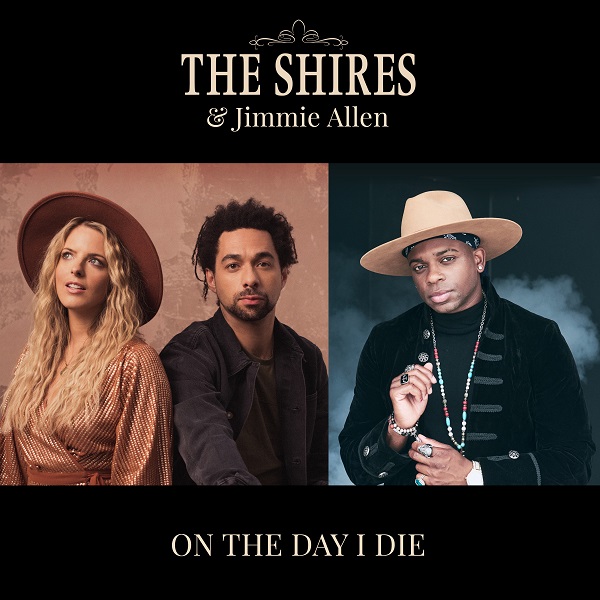 The Shires, the UK’s best-selling country act of all time – comprised of Crissie Rhodes and Ben Earle – are excited to premiere their music video for “On the Day I Die” with newly-named ACM New Male Artist of the Year, Jimmie Allen. The video was released today and can be watched HERE.

“Ironically, ‘On the Day Die’ is a song that is celebrating life,” say Ben Earle and Crissie Rhodes. “We’ve had a lot of time recently to look around and appreciate the small, everyday things in our lives. It feels like the most perfect time to release this song, and we are so excited to have Country star Jimmie Allen featuring. The message of the song really resonated with him and his incredible vocals took a song we already loved to a whole new level.”

Penned and composed by Ben Earle (of The Shires), Peter Hammerton, and Fiona Bevan, “On the Day I Die” is a song about enjoying life to the fullest and celebrating the memories of those on Earth and those who are no longer with us. It’s a mid-tempo track about celebrating the moments big and small and everything in between.

Shortly before the premiere, Crissie and Ben took part in an Instagram Live chat with Baylen Leonard to discuss their new track ‘On the Day I Die’ featuring The Shires and Jimmie Allen. In addition, Jimmie Allen is set to be the guest appearance on The Shires Apple Music “London To Nashville” radio show that will broadcast May 10.

The new collaboration comes from the track off The Shires’ fourth and most recent album Good Years. The duo with “spellbinding harmonies” (Billboard) collaborated with Country star Jimmie Allen in the brand-new music video which features all three artists and is full of youth and fresh representations of love and life.

Released in the U.S. via BBR Music Group, Good Years is the follow-up to Accidentally on Purpose and GOLD-certified albums Brave and My Universe. The project was recorded in Nashville and includes 12 new tracks, 10 of which are co-written by the duo. According to the illustrious Forbes, “every song showcases The Shires’ signature harmonies and relatable lyrics.” Produced by Lindsay Rimes (Kane Brown, Thomas Rhett, Kelsea Ballerini, LOCASH), Good Years, also features some of Nashville’s top songwriters, including Cam, Bob DiPiero and Canaan Smith. Stream Good Years at  https://TheShires.lnk.to/GoodYearsPR.

The Shires were the first-ever British act to win a coveted CMA Award when they accepted the Jeff Walker Global Artist Award celebrating outstanding achievements by a country act outside of the U.S. in 2017. Ben also received the 2020 CMA International Broadcaster Award, hosting on BBC Radio 2 (14.4 M weekly audience) while filling in for veteran broadcaster, Bob Harris. They are also the first UK country act to perform in the historic circle at the Grand Ole Opry. The Shires have opened for Little Big Town, Sam Hunt, and Shania Twain, and most recently joined Carrie Underwood’s 2019 Cry Pretty 360 Tour in their native country.