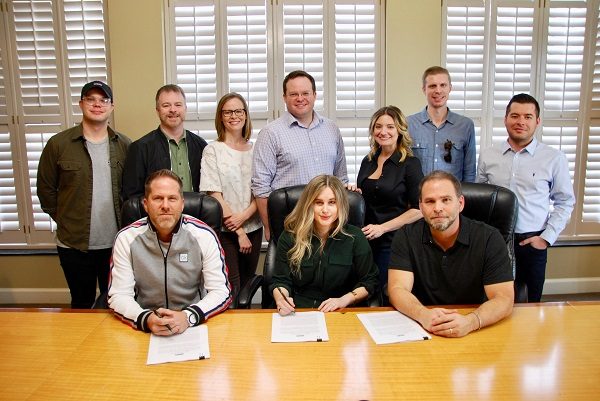 Sykamore is the first artist to sign with Music Knox Records, a joint venture between award-winning Country music producer Michael Knox and BBR Music Group/BMG. Sykamore is a singer-songwriter celebrated for her articulate songwriting and genre-defying voice.

The talented vocalist, musician, composer and storyteller moved to Nashville in 2017 after being discovered on Twitter by prolific hit songwriter, Rhett Akins.  Soon after, she signed a publishing deal with Home Team (founded by Rhett Akins and Thomas Rhett as a joint-venture with Roc Nation). In 2018, Sykamore self-released an EP titled Self Medicine that has garnered more than 1.4 million on-demand streams to date.

“I’m honored to be the first artist signed to Music Knox,” said Sykamore.  “The passion Michael has brought to this project as A&R and producer is truly amazing, and it makes me so excited for what’s next.  The BBR/BMG family has been incredible, and I can’t wait to work with them and put out some great songs!”

“We couldn’t be prouder to have her as our first signing. When I first heard Sykamore, her voice grabbed my attention immediately. Being a song guy, when I found out that she was a writer on everything I was hearing, it was a no brainer for me,” said Knox. “We are very excited for everyone to hear what we love about Sykamore!”

“We are in awe of Sykamore’s talent and I am thrilled to be a part of this team. There is such an extraordinary depth to her songwriting,” said Jon Loba, EVP BBR Music Group. “She has a unique ability to write universally relatable songs while still weaving in such eloquent and intricate details and then deliver it in such a personal way.”

The Carseland, Alberta, Canada native was raised on a fourth-generation cattle ranch in a house built by her great grandfather. Growing up listening to superstars like the Dixie Chicks, fellow Canadian Shania Twain and Zac Brown Band, Country music has always been Sykamore’s passion, but it wasn’t until 2012 that she began creating music of her own. In the time since, she has been recognized at numerous songwriting-focused events including the ATB All-Albertan Song Contest, Project Wild, and the Canadian Country Music Association’s annual Discovery Program. She has traveled across North America performing for thousands, including several hometown shows at the world famous Calgary Stampede.