MARKS THE BEACH BOYS’ GRAND OLE OPRY DEBUT; TRIFECTA OF HIGH-PROFILE APPEARANCES TOGETHER AFTER BUZZED-ABOUT POP-UPS AT THE RYMAN AUDITORIUM AND STAGECOACH FESTIVAL 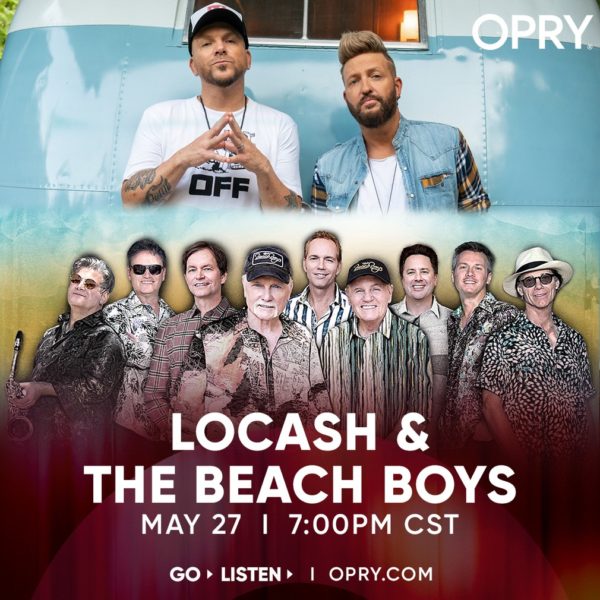 Bringing all the good vibrations to the Grand Ole Opry, BBR Music Group/BMG’s Wheelhouse Records’ rowdy outliers LOCASH will welcome The Beach Boys for a can’t-miss performance on the legendary circle next Friday (5/27). Marking The Beach Boys’ long-awaited debut on the iconic show, fans can purchase tickets here.

“We can’t wait to play the Grand Ole Opry together with our new friends The Beach Boys,” shares LOCASH’s Chris Lucas. “And it being their Opry debut makes this an unforgettable night and experience for everyone. Let’s take the Opry to The Beach Boys!”

Splitting the bill for the second half of the night, LOCASH and The Beach Boys will play several of their hit songs each, including uniting for LOCASH’s single “Beach Boys,” featuring Mike Love and longtime bandmate Bruce Johnston. Currently sailing at County radio, the summer anthem has tallied 2.63 MILLION global streams to date. Other artists scheduled to perform are Lorrie Morgan and Darryl Worley. Highlights from the show will be featured in an airing of Opry Live later this summer.

“I can already tell this is going to be one of those nights that we’ll never forget. First the Ryman Auditorium, then Stagecoach Festival, and now the Grand Ole Opry … with The Beach Boys! They’ve joked around about making us honorary Beach Boys, and now Mike [Love], Bruce [Johnston], and the boys all feel like family,” adds LOCASH’s Preston Brust. “Being a part of The Beach Boys’ Opry debut is going to go down as one of the coolest moments of our entire career!”

This landmark performance is among a trifecta of high-profile appearances together after buzzed-about pop-ups at the historic Ryman Auditorium (2/6) in Nashville, TN – where LOCASH first broke the news of the surprise collaboration during The Beach Boys’ sold-out show – and recent Stagecoach Festival (5/1) in Indio, CA – which caught massive media attention from Variety, Billboard, PEOPLE, USA TODAY, and more. Watch a recap video of Stagecoach Festival here.

Riding high through the summer on their Woods & Water Tour 2022, LOCASH has major music festival dates mixed with tour stops stacked like CMA Fest on the Chevy Riverfront Stage in Nashville, TN, on June 9. Find a full list of show stops here. In addition, the dynamic entertainers will step into the rotating role of “Bailey Stone” during the world premiere engagement of the highly anticipated stage show, MAY WE ALL: A NEW COUNTRY MUSICAL. Appearing at Nashville’s Tennessee Performing Arts Center on June 7, tickets are available via TPAC.org.

The Beach Boys are currently on their “60 Years of the Sounds of Summer” 2022 Tour celebrating their 60th anniversary. On June 17, they’ll release a newly remastered and expanded edition of The Beach Boys career-spanning greatest hits collection, Sounds Of Summer: The Very Best Of The Beach Boys. The expanded Sounds of Summer features 24 new mixes including two first-time stereo mixes, plus 22 improved stereo mixes enhanced by today’s digital stereo extraction technology. The collection is available to PREORDER now in a variety of formats, including a super-deluxe version and a remastered single disc that boasts the original 2003 release. For a complete list of The Beach Boys’ tour dates and ticket information please visit mikelove.com or thebeachboys.com.