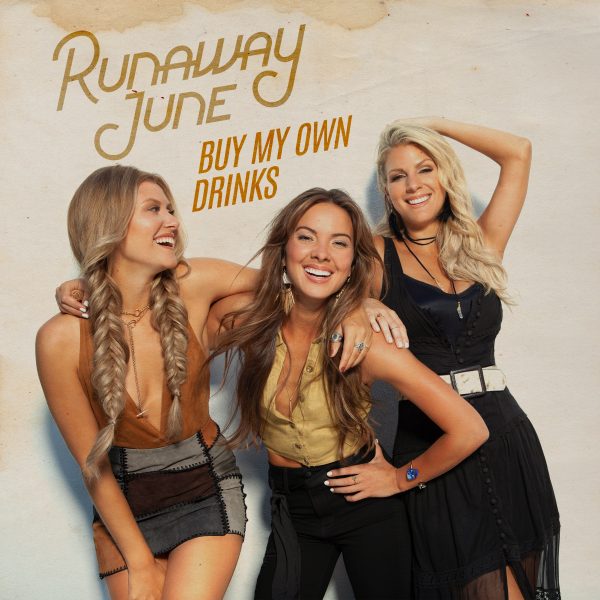 Nashville, Tenn. (September 16, 2019) – RUNAWAY JUNE’s “Buy My Own Drinks” has extended its run marking the first time a female trio has broken into the top five on the Mediabase Country chart since the Dixie Chicks in 2003. This is a thrilling triumph for the band as this is also their first top five hit as songwriters. This milestone is part of Country music history being the highest charting female trio since the Dixie Chicks’ “Travelin’ Soldier” SIXTEEN years ago. Along with earning this coveted accolade, the trio announces their upcoming performance on ABC’S Good Morning America on October 3rd.

Not only are the members of Runaway June tremendous performers and musicians, but they are clearly prosperous songwriters. This song is the first top five song for each of the members as writers in which they wrote alongside Hillary Lindsey and Josh Kear. As songwriters, the members of the band wrote or cowrote a majority of the tracks on their critically acclaimed album Blue Roses.

“There’s a very contemporary spirit of independence and grown-ass agency that courses through these songs.” – Rolling Stone

“This song is a rallying cry for fiercely independent women to celebrate their own damn self-sufficiency.” – CMT

Since Naomi Cooke, Hannah Mulholland and Jennifer Wayne formed four years ago, Runaway June has become an ACM and CMT nominated band, been named CMT’s “Next Women of Country,” scored major tours and opening slots with some of the biggest names and icons in music (including Garth Brooks and Carrie Underwood), performed on national TV including the CMA Awards, ACM Awards, CMT Awards and TODAY, and soon to be GMA. The trio has received high praise and raves from dozens of critical outlets, all while constantly digging deeper to fill out a sound that connects them to the tradition of Country music and its devoted fans.

Runaway June’s long-awaited debut album, Blue Roses was recently released on June 28, 2019 via Wheelhouse Records. Produced by Dann Huff. They are also on the road through the fall, supporting seven-time Grammy winner and Pollstar’s three-time top female country touring artist Carrie Underwood on the Cry Pretty Tour 360. Sponsored by CALIA, the tour kicked off on May 1 in Greensboro, NC, and will play 55 arenas across the U.S. and Canada promoted by AEG Presents. Tickets for the concerts can be purchased here.

Lauded by Billboard as the “Next Hot Trend in Country Music” and likened to a ‘Dixie Chicks for a new generation,’ Runaway June’s organic three-part harmonies and ringing strings have established them as a top new group with its “inescapable talent” (AXS.com). The BBR Music Group/Wheelhouse Records act is comprised of the vocal stylings and musicianship of Naomi Cooke (lead vocals, guitar); Hannah Mulholland (vocals; mandolin); and Jennifer Wayne (vocals; guitar).  The trio is receiving rave critical notices from the likes of Billboard, Rolling Stone Country, The Huffington Post, People and dubbed by CMT as “Next Women of Country.” It has also appeared on national TV including the CMA Awards, ACM Awards, CMT Awards and TODAY, and soon to be GMA. Runaway June has been celebrated for its brand of organic and melodic Country music. It is the first all-female trio in over sixteen years to score a top five hit and have scored nods from the industry with nominations at the 2019 CMT Awards and at the 2019 ACM’s for New Vocal Duo or Group of The Year. Their debut album, Blue Roses was released on June 28. For more information, visit: www.RunawayJune.com.