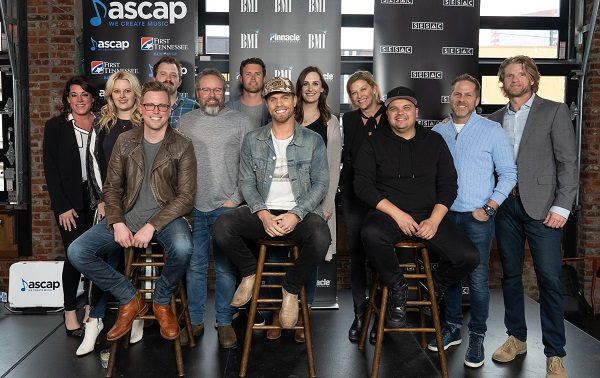 Embracing the funky-fresh, dive bar aesthetic of Hi-Fi Clyde’s on Church, the party was hosted by ASCAP, BMI and SESAC in honor of Lynch’s SIXTH No. 1 as an artist. Co-writers Lynch (BMI), Justin Ebach (SESAC) and first-time chart-topper Andy Albert (ASCAP) expressed their immense gratitude for the hard work and devotion of the crowd of industry pros, family, and friends in attendance that helped take the easy-breezy chart-blazer all the way to the top.

“We were all just so sure about this song from the beginning. We only had the track down and we knew it was something special,” shared Lynch. “I want to thank these two guys up here (Albert and Ebach) for getting up on day three after a long night on the bus ready to write, because that’s what leads to moments like this.”

Giving more cause for celebration, Lynch’s next single, “Ridin’ Roads” electrified Country airwaves yesterday after arriving on radio playlists as the #1 most-added song of the week, with 46 stations on board spinning the track nationwide.

“Ridin’ Roads” continues Lynch’s relentless push forward, boldly reaffirming his place as one of Country’s elite new stars. Reaching the Top 5 on the iTunes All Genre Songs chart and making a statement as the #1 highest-selling Country single last week, the tune touches on the laid-back nostalgia of life in Tullahoma, TN, cruising a two-lane road with easy-rolling melodies that mix seamlessly with Lynch’s signature country-to-the-core lyrics.

“Ridin’ Roads” leads the charge off of the RIDIN’ ROADS EP, drawing in fans and critics alike to the bold sonics Lynch has consistently molded and evolved with throughout his career. Praise keeps pouring in for the project:

“With programmed beats and studio polish, ‘Ridin’ Roads’ is balanced by some unexpected Dobro and stringed instruments, linking Lynch to his ‘Cowboys and Angels’ country past.” – Rolling Stone Country

“…continuing to push the boundaries of the genre and experiment with his own sound.”
– Whiskey Riff

Lynch will take the trio of new tunes alongside “Good Girl” to his North American fan base this spring as direct support on Thomas Rhett’s Canadian LIFE CHANGES and U.S. VERY HOT SUMMER tours, starting April 24 in Montreal, Canada.