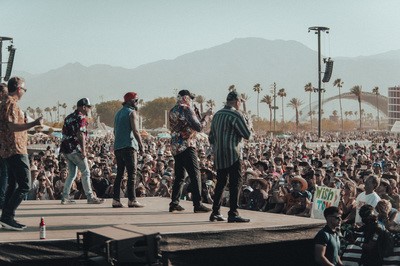 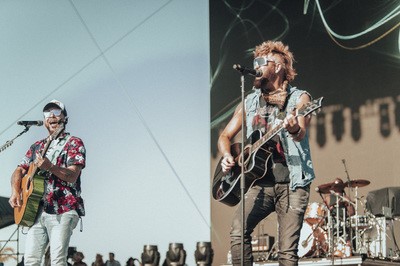 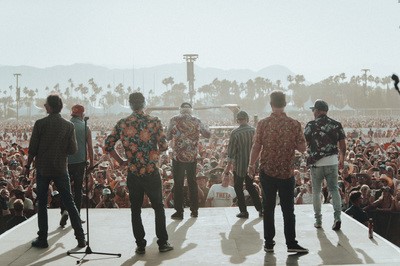 “When we wrote the song, we dreamed about a moment like this, but we weren’t even sure if they would approve the song,” LOCASH’s Preston Brust shared with Variety.

“They called us back and not only approved it, but Mike wanted to be on it and have the high harmonies and that Beach Boys sound,” added LOCASH’s Chris Lucas to Variety. “And it was Mike Love’s idea to change the intro to the original Beach Boys’ ‘round round, get around, I get around,’ and so we did that and we were kind of Beach Boys for like five minutes.”

“The song itself, ‘Beach Boys,’ is so hooky,” Love further shared with Variety. “I think it’s a really fun song. And LOCASH joined us on our sold-out show in Nashville a couple of months back, and so now we’re joining them on their set out at Stagecoach, which is awesome.”

“Kick off summer early with LOCASH’s hit single featuring The Beach Boys’ co-founder Mike Love and longtime bandmate Bruce Johnston,” hailed E! News, as LOCASH, Love, and Johnston amped the packed audience with the summer anthem alongside The Beach Boys’ touring band – Christian Love, Scott Totten, and Brian Eichenberger. Earlier in LOCASH’s sun-soaked set on the T-Mobile Mane Stage, they heated it up with No. 1 smashes like “One Big Country Song” and “I Know Somebody,” as well as newer releases from their Woods & Water EP. Spotted in Billboard, USA TODAY, and more, The Orange County Register raved, “Duo LOCASH got people singing and swaying,” while The Desert Sun agreed, “The fun cameo provided for a very SoCal afternoon.” Tapping The Beach Boys for a 4-pack performance including mass sing-along classics “Kokomo” and “Fun, Fun, Fun,” the LOCASH/The Beach Boys supergroup wrapped with high-flying LOCASH breakout “I Love This Life.”

Introduced by Guy Fieri onstage ahead of their head-turning appearance, LOCASH was also the guest artist Saturday (4/30) at Fieri’s on-site cooking demonstration at Guy Fieri’s Stagecoach Smokehouse. “A substantial crowd pressed against the barricades,” observed Variety, as the celebrity chef and LOCASH created a signature dish together for the hungry fans. And “when an audience member asked the duo what their favorite song to cover was, Prince’s ‘Purple Rain’ came up, which led to an a cappella rendition while Fieri and his guest made it literally, or liberally, rain parmesan cheese over the enormous griddle.”

The Beach Boys are currently on their “60 Years of the Sounds of Summer” 2022 Tour celebrating their 60th anniversary. On June 17, they’ll release a newly remastered and expanded edition of The Beach Boys career-spanning greatest hits collection, Sounds Of Summer: The Very Best Of The Beach Boys. The expanded Sounds of Summer features 24 new mixes including two first-time stereo mixes, plus 22 improved stereo mixes enhanced by today’s digital stereo extraction technology. The collection is available to PREORDER now in a variety of formats, including a super-deluxe version and a remastered single disc that boasts the original 2003 release. For a complete list of The Beach Boys’ tour dates and ticket information please visit mikelove.com or thebeachboys.com.