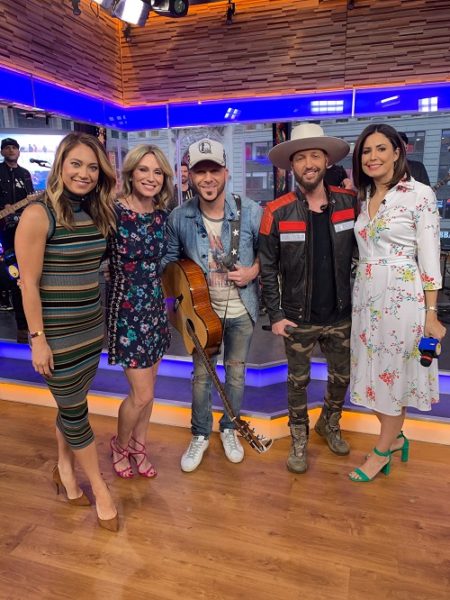 “Separated at birth singing partners,” (Rolling Stone), LOCASH today released their new album, Brothers via Wheelhouse Records / BBR Music Group. The project is named not only after the undeniable bond the closer-than-kin (and often mistaken as biological brothers) twosome share but in recognition of how music brings people together and that we’re all connected.

The duo kicked off a lengthy album launch on Monday night with an album release party in Nashville, moderated by Melinda Newman, the Executive Editor of West Coast and Nashville at Billboardmagazine, before heading to New York City for a week of media stops, including a visit to New York’s Country 94*7, People and the Billboard studios in the Big Apple for a Billboard Live performance (watch here). In celebration of the release of their new project, the acclaimed duo gave fans the first televised glimpse of the new project this morning on Good Morning America. LOCASH had the crowd up on their feet and dancing as they performed their Top 25 hit single, “Feels Like a Party,” on the 8AM hour. Catch the performance here. Additionally, LOCASH today debuted a special YouTube Sessionsperformance of “Feels Like a Party” which premiered on YouTube (watch here).

Continuing their busy run, this evening the twosome will kick off a series of album release parties across the country including parties in Silver Springs, Uncasville, Birmingham, Chicago, and San Diego. Keeping in spirit with the “we’re all brothers and sisters” message of Brothers, LOCASH will meet with fans following each performance to sign albums—they are also donating proceeds from onsite album sales to Big Brothers Big Sisters. Additionally, for each show LOCASH is selecting an honorary “brother or sister” to win a special VIP experience with LOCASH. To enter, fans must post about the album on Instagram or Twitter using #Brothers and fill out this form.

Concluding their street week, the 2019 ACM Duo of the Year Award nominees will head to Las Vegas for the 54th ACADEMY OF COUNTRY MUSIC AWARDS™ where they will perform at the ACM Awards Official After Party on Sunday, April 7. Immediately following, the duo who is “long regarded as one of Nashville’s hardest working acts,” (Rolling Stone) will continue their travels to Los Angeles in support of their album, making stops at FOX News, Access Hollywood and Radio Disney before hosting an album listening party with KKGO (4/10). LOCASH will then wrap their album launch with a special performance at the Grand Ole Opry on Friday, April 12th. For each album purchased onsite, guests will enter to win an unique “Backstage VIP Experience” with LOCASH. For more details and to purchase tickets, visit here.

Produced by Corey Crowder, Florida Georgia Line’s Tyler Hubbard, Lindsay Rimes and Jordan Schmidt, Brothers is chock-full of feel-good tunes that make you want to call up friends, reminisce and make new memories Brothers has a neighborly sentiment woven throughout the project that makes the camaraderie of the pair almost palpable. Brothers is available here.

“LOCASH has a talent for delivering exuberance in their music, a reflection of their own positive spirits and honest chemistry. With Brothers, the duo fulfills their goal of uniting people through optimistic songs, a genuine celebration of life and the bond that makes them one of country music’s most passionate acts.” –Sounds Like Nashville

“Even at their breeziest and most party-ready, LOCASH never makes mindless ear candy; each song reflects joy, gratitude, and the real love for each other that Brust and Lucas have developed along the way.” –The Boot

This summer, LOCASH will be hitting the road, supporting Chris Young’s Raised on Country Tour and Rascal Flatts’ Summer Playlist Tour as well as performing at a series of festivals across the country including the recently announced performance on CMA Fest’s Chevy Riverfront Stage.