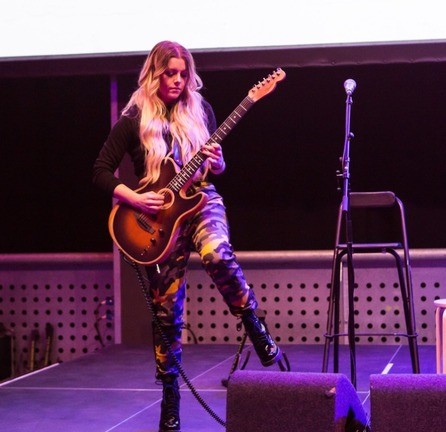 Multi-instrumentalist musician, vocalist, songwriter and 2019 ACM New Female Artist of the Year nominee Lindsay Ell continues to make her march around the globe as she takes to the stage tonight at Australia’s CMC Rocks. She launched the worldwide trek with an appearance at Verti Arena for the C2C (Country to Country) Festival’s first-ever Berlin date, before setting out for shows in Amsterdam, Munich and Cologne as part of the CMA’s ‘Introducing Nashville’ series, as well as headlining shows for her fans.

Ell wowed crowds with her musicianship as she worked her way through songs from Billboard’s “Best Country Album of 2017” The Project which debuted at No. 1 on the Country Album Sales Chart.

One of the memorable moments of the tour so far came at one of Ell’s headlining shows in Munich.  While the powerhouse musician may be a master of the guitar, she lacks to ability to whistle. As she finished delivering a cover of Otis Redding’s “(Sittin’ On) The Dock of the Bay” she asked the crowd if anyone new how to whistle. The crowd spontaneously broke into a perfectly harmonized choir of whistles as Ell stepped away from the mic and took in the amazing acapella moment, a reminder of the power of music.

“It feels so amazing to be able to circle the globe and play for fans from all over the world. It goes to show, no matter where you’re from and what language you speak, you can still feel the power of music,”  Lindsay noted. “To be able to play in front of audiences I’ve never met before and hear them sing along to every word of my songs is the reason why I wake up every morning and do this.”

For fans back in the states Ell released a video version of her chilling song “Space” on Wednesday as part of her vlog series, “What The Ell?”. View the video here.

Upon returning to the states, Ell will head to Las Vegas for Country Music’s Party of the Year® where she is nominated for New Female Artist of The Year at the 54th ACADEMY OF COUNTRY MUSIC AWARDS™, as her duet “What Happens In a Small Town” with Brantley Gilbert continues to climb up the charts. Watch the music video here.