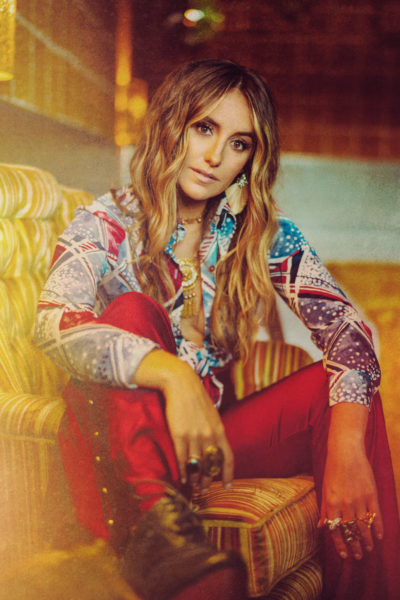 NASHVILLE, TN—(February 12, 2020)— Rising Country artist, Lainey Wilson, shared her Valentine’s Day plan to make her official Grand Ole Opry debut on Friday night. In the spirit of the holiday, Lainey will be spending time with her first and biggest love, Country music, and realize her dream of standing on that iconic stage.

Stepping into Country music’s hallowed circle for the first time, Lainey will fulfill an aspiration she’s had since her first visit to Nashville at the age of nine. This morning, while sharing her excitement about Friday’s debut on WSM Radio’s Coffee, Country & Cody, she recalled visiting the Opry and walking by the WSM studio, thinking how cool it would be to be on 650 AM one day. Today, she made that a reality, performing two songs on the air, which earned a text from the Grand Ole Opry’s VP/Executive Producer, Dan Rogers saying “Wow, Lainey sounds great!”

“Most little girls dream about their wedding day, walking down the aisle in a beautiful wedding dress. Well, this is the day I’ve been dreaming about my whole life—to be standing in the Grand Ole Opry circle in a pair of bell bottoms, doing what I love,” said Lainey Wilson. “Stepping into that circle is about like stepping into Country music heaven. You hear about how it’s the best feeling in the world…how it’s better than you imagined it…but you don’t really understand until you get there and experience it for yourself. So many of my influences have stood in that circle. I’m humbled and excited to feel their spirit when I step in for the first time.”

Since releasing her first single “Dirty Looks” to Country radio, things have only been heating up for the newcomer—just last week she received a roaring standing ovation in front of a sold-out crowd in Springfield, MO (and consequentially sold out all of her merch), found out she has been added to several nights with Dierks Bentley’s 90’s Country parody band, Hot Country Knights in addition to opening for Country legend Reba McEntire in April.

Currently out on the road with Justin Moore and Tracey Lawrence on their Late Nights And Longnecks Tour, Lainey’s live performances, with her guitar-wielding rock ‘n’ roll swagger and rousing dance moves has earned her slots playing hundreds of shows with greats like Randy Houser, Morgan Wallen, The Cadillac Three, Jon Pardi and more. She also recently (January 15) performed on the Bobby Bones and the Raging Idiots’ Million Dollar Show, benefitting St. Jude and appeared on his popular BobbyCast podcast.

In the fall, Lainey released latest new EP, Redneck Hollywood. Produced by mastermind, Jay Joyce (Eric Church, Keith Urban, Little Big Town), the title of the four-track project is drawn from lyrics in the semi-autobiographical track, “LA,” which celebrates the Louisiana native’s down-home upbringing, zest for life and dreams of making it in this big world. In just four songs (all of which she co-wrote), Redneck Hollywood highlights Lainey’s depth as an artist like never before as she offers a thoughtful look into her psyche and all of its complexity. Mixing traditional Country sounds with grit, soul and just a bit of funk, Lainey has developed her own “bell bottom country” sound that reflects both her personality and her preferred fashion aesthetic.