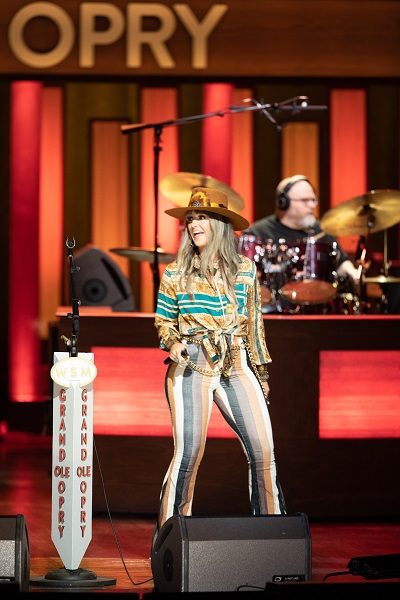 “One of Country music’s most promising young stars,” (Whiskey Riff), Lainey Wilson has one of the fastest growing songs on Country radio with her Top 10 (currently No. 7) hit “Things A Man Oughta Know.” The single continues to climb with some of the biggest audience and point increases this week, more than 112 million on-demand streams and is in the Top 10 in Country single sales. The single, (having reached the No.1 position on Sirius XM’s The Highway Hot 30 Weekend Countdown) is also having international success—it has been certified Gold in Canada, the single is nearing the Top 10 on Canadian Country radio and is just as popular in the UK.

Last night she performed on the famous Grand Ole Opry stage after kicking off her first weekend on Jason Aldean’s Back In The Saddle Tour last weekend. She joined HARDY onstage for his No.1 hit, “One Beer” (see a snippet of the performance, HERE).

Proving worthy of being named as “one to watch” and “must listen” by many, Lainey was recently nominated for the Music Row’s “Discovery Artist of the Year” and CMT Music Award’s “Breakthrough Video of the Year” and was named the Opry NextStage artist for August. As part of the institution’s program, the Bell Bottom Country singer shared stories about her musical journey in two emotional videos (WATCH: Part 1 and Part 2).

August 1, in honor of National Sisters Day, Wilson released “Two Story House,” a deeply personal track about her relationship with her sister. The acoustic track was shared exclusively with People (who calls Lainey a “future legend”) with a video for the song which features home footage of Lainey and her family. This is Lainey’s first new release since her critically acclaimed album, Sayin’ What I’m Thinkin’,  which debuted earlier this year and was identified as an “early favorite for album of the year.”

A prolific songwriter, Lainey co-wrote each song on her album and has gained attention in the industry for her talents. She co-wrote Flatland Cavalry’s new track “…Meantime (feat. Hailey Witters)” as well as Chrissy Metz’s latest single, “Go Girl” in addition to cuts on some of Luke Comb’s earlier work.