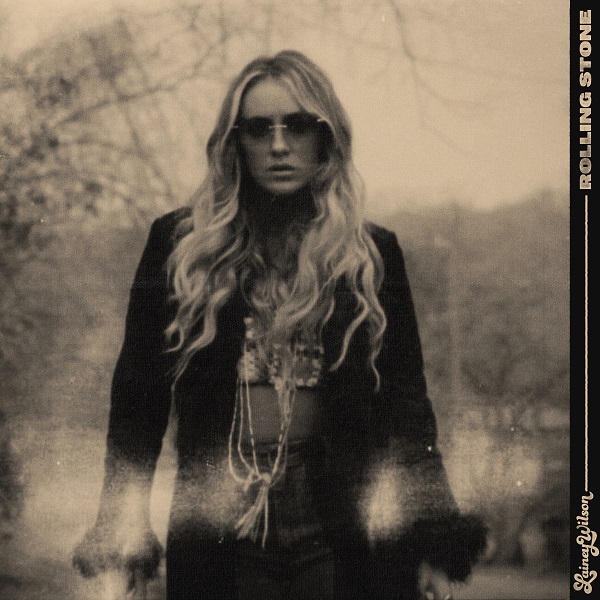 With a sound reminiscent of an outlaw making their way cross-country on a runaway train, the tenderhearted free spirit shares her love for the life on the road making music with a compassionate warning: “don’t give a rock to a rolling stone.” Written with Tammi Kidd Hutton and Brent Anderson, Lainey bares her gypsy side in this new song, sharing her vow to remain steadfast in who she is and what she wants her life to be.The track shows a new dimension of the big-hearted, vivacious bell-bottomed newcomer, and highlights the depth of the talented artist’s songwriting capabilities.

“When I got into the studio to record with Jay [Joyce], my producer, it started it off with a train beat and I remember closing my eyes and singing along, empowered by the feeling of freedom that goes hand-in-hand with chasing such a crazy, nomadic dream,” said Lainey Wilson. “Jay’s production just brought it all to life in such a cinematic way…it was like I got lost in an old Western movie….sepia tones and long gazes out of a window of a train.”

This song is the second of several new monthly releases which the songwriter recently announced with a hilarious parody video that is quintessentially Lainey, highlighting all of her Bell Bottom Country vibes. The first release was “WWDD,” which Rolling Stone says “mixes a stomping beat with grimy electric guitars out of Sticky Fingers-era Rolling Stones and the arena-size choruses of Eighties Bruce Springsteen.” Short for “what would Dolly do?” Lainey praises her idol Dolly Parton with this song, noting all of the ways that make her a role model.

Keeping busy while practicing social distancing, Lainey will continue to connect with fans via social media today she is taking over the Grand Ole Opry’s Instagram, going live on Sounds Live Nashville’s Facebook page at 1pm CT, joining Jessi Alexander on her Airstream live around 5:20pm CT and on Saturday she will go live on The Boot’s Facebook page.

These monthly releases come on the heels of Lainey’s 2019 EP, Redneck Hollywood. Produced by mastermind, Jay Joyce (Eric Church, Keith Urban, Little Big Town), the title of the four-track project is drawn from lyrics in the semi-autobiographical track, “LA,” which celebrates the Louisiana native’s down-home upbringing, zest for life and dreams of making it in this big world. In just four songs (all of which she co-wrote), Redneck Hollywood highlights Lainey’s depth as an artist like never before as she offers a thoughtful look into her psyche and all of its complexity. Mixing traditional Country sounds with grit, soul and just a bit of funk, Lainey has developed her own “bell bottom country” sound that reflects both her personality and her preferred fashion aesthetic. Featured on the EP is her first Country radio single, “Dirty Looks,” which Rolling Stone dubbed “a clever, mid-tempo ballad that mixes double entendres with Wilson’s hazy vocals.”