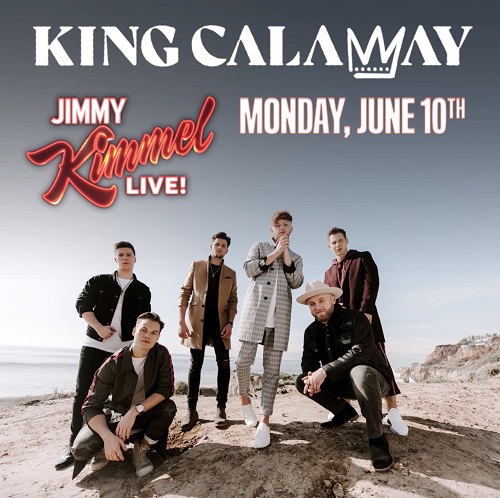 As one of country’s hottest new acts, King Calaway are adding another milestone to their rapidly rising journey, as they are set to make their national television performance debut June 10 on Jimmy Kimmel Live! The band will perform their hit single, “World For Two”, off their self-titled debut EP released in January. “World For Two” was the most added song at country radio in its first week at US radio, has been in the Top 5 for consumption per spin and streams per spin for the past six weeks and continues to grow rapidly across streaming platforms.

Ahead of their late night debut, the fast-rising stars will be performing at The Grand Ole Opry for their second performance on June 1, followed by their first CMA Fest appearance where they will be performing at the Firestone Country Roads Stage at Ascend Amphitheater and the HGTV Lodge on June 6. The band most recently opened for Garth Brooks at his U.S. Bank Stadium show in Minneapolis, MN on May 3, 2019. Garth himself introduced the band onstage as the opening act, marking the first time he had done this in his career.

The news continues to solidify the six-piece band’s status as an act on the rise, building on the success of their debut single “World For Two” from their self-titled EP released in January, via BMG/BBR Music Group. The band has been named one of seven country acts to watch in 2019 by Billboard, who praises the EP as “rife with thick harmonies [and] poppy energy” and named as one of “2019 Artists To Watch” by Amazon Music.