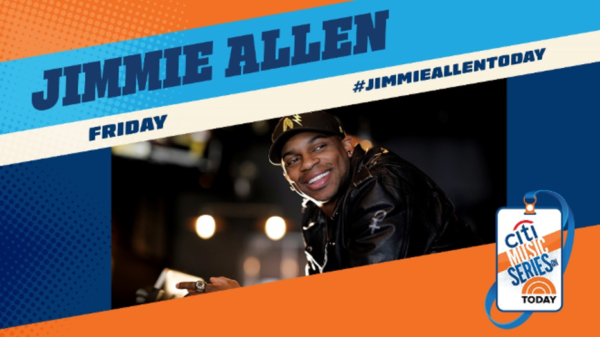 August 12, 2020 – Platinum-selling recording artist Jimmie Allen will return to TODAY this Friday August 14 to perform two songs from his hit collaboration EP Bettie James as part of the 2020 Citi Music Series. His performance of “Why Things Happen” will air during the 8am hour and “Freedom Was A Highway” in the 10am hour.

Inspired by and named for his late father, James Allen, and late grandmother, Bettie Snead, the result is a musical composition of love, heartbreak, perseverance, hope and faith. On Bettie James, Paisley joins Allen for the breezy “Freedom Was A Highway” while Pride and Rucker lend their voices to bring together three generations of Black country artists on the poignant “Why Things Happen.”

Bettie James has garnered both fan and critical acclaim for both the music, the historic nature of various collaborations, and its subsequent place in country music history. NPR calls the project an “announcement of [Allen’s] arrival” and a “huge step for country” while Billboard hails it “a powerful statement from a developing voice.” Rolling Stone describes “Why Things Happen” as “part polemic, part proclamation, and part prayer… opening up space for the artists to bear witness.”

Allen last appeared on TODAY With Hoda & Jenna in June after the death of George Floyd, speaking candidly with Kotb and Hager about leading with love to enact lasting change in the fight for racial equality. Watch the interview on TODAY.com: here.

Allen recently landed his second career No. 1 single when “Make Me Want To” notched the top spot on both the Billboard and Mediabase charts in March, marking the first time in history that a Black artist launched their career with two consecutive No. 1 singles on Country radio. His first was the platinum selling No. 1 single “Best Shot” off his 2018 debut album Mercury Lane. Allen’s current single “This Is Us” with Noah Cyrus (also featured on Bettie James) is his fastest consuming single, amassing nearly 40 million streams to date. Earlier this month, Allen signed a worldwide publishing deal with Sony/ATV Music Publishing and TwentySeven Music Publishing, led by industry executive Barry Weiss and songwriter and producer Jenna Andrews.