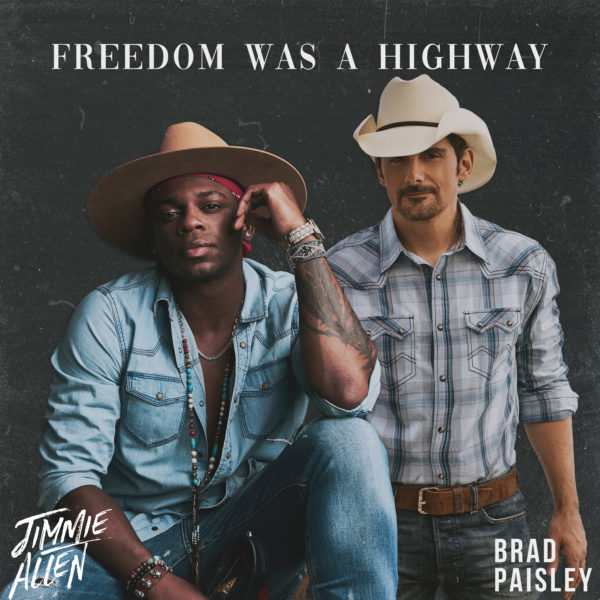 GRAMMY®, ACM and NAACP Image Award nominated, multi-platinum recording artist Jimmie Allen lands his third career chart-topping single, with “Freedom Was A Highway” hitting No. 1 on both the Billboard and Mediabase charts. It also marks Paisley’s 25th song to hit No. 1.

“Freedom Was A Highway”is Allen’s current single off his 2021 star-studded album Bettie James Gold Edition with his friend – and country music superstar – Brad Paisley. The breezy, windows down track was co-written by Allen, Ash Bowers & Matt Rogers and features an unmistakable, signature Paisley guitar solo. Allen and Paisley’s vocals pair to reminisce about the nostalgia and simplicity of more carefree, youthful days. Watch the music video for the song, co-directed by Allen and Christopher Beyrooty, HERE.

“This song is super special to me. I wrote it about the streets I grew up driving on in Milton and Lewes, Delaware. It has been amazing to see the song connect with so many people,” Allen told Billboard of the song’s meaning and chart-topping achievement. “A huge thank you to my friends at country radio and my Stoney Creek team.”

“Working with Brad was great. I have been a fan of him since his career started and have always wanted to work with him,” Allen continued. “I’m honored to call him a collaborator and friend. Also, he crushed that guitar solo and then vocals!”

“Couldn’t be prouder to ride shotgun on this record with Jimmie,” said Paisley. “I’ll be the Sally Field to his Burt Reynolds anytime.”

“Freedom Was A Highway” marks Allen’s third career chart-topping single, following “Make Me Want To” in March 2020 and “Best Shot” in November 2018, both from his debut album Mercury Lane. Allen and Paisley have graced the stage together to perform the track on Jimmy Kimmel Live!, Good Morning America, and the 56th Annual ACM Awards – where Paisley surprised Allen mid-performance.

The accolade adds to a growing list of achievements in 2022 for Allen, including a Best New Artist nomination at the 64th Annual GRAMMY® Awards, an Outstanding New Artist nomination at the 53rd NAACP Image Awards, a Male Artist of the Year at the 57th ACM Awards (of which he will co-host alongside Dolly Parton & Gabby Barrett), inclusion in The Country Music Hall of Fame® and Museum’s upcoming American Currents: State of the Music exhibit, and a sold-out start to the Down Home Tour – his first ever solo headline tour. Allen is also the reigning CMA New Artist of the Year and ACM New Male Artist of the Year.