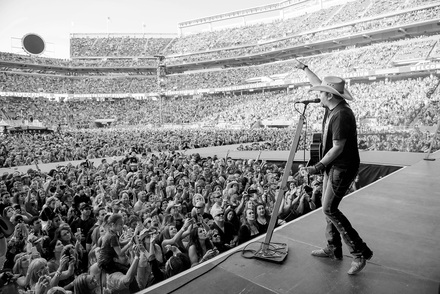 JASON ALDEAN SOLIDIFIES 16TH NO. ONE HIT WITH “TONIGHT LOOKS GOOD ON YOU” FOLLOWING A SHOW-STOPPING SOLD OUT WEEKEND FOR MORE THAN 110,000 FANS

NASHVILLE, TN – July 20, 2015 – Coming off a record-breaking sold-out weekend on the 2015 BURN IT DOWN TOUR with more than 110,000 fans in attendance, RIAA’s top digital country male artist of all time Jason Aldean celebrates his 16th No. one single as “Tonight Looks Good On You” summits both the Billboard Country Airplay and Mediabase radio charts this week. This is the 3rd consecutive chart-topper from his PLATINUM certified album OLD BOOTS, NEW DIRT.

“Being able to look out into a stadium full of people and have them singing and swaying to this song has been a pretty cool thing the last two months,” said Aldean.  “We’ve never really needed much of an excuse to throw down backstage or get a little bit rowdy, but I have a feeling the party might be bigger than usual this weekend in Pasadena.”

Over the weekend, Aldean sold out Chicago’s Amphitheater before two nights at Target Field in Minneapolis, MN (7/18, 7/19), setting an impressive attendance record on Saturday with more than 44,000 fans. His show-stopping set showcased “live vocals that are better than ever” (Star Tribune) and his “confident swagger” (The Times), and will continue this weekend in Paso Robles, CA (7/24) and Pasadena, CA (7/25) where he will headline a historic first-ever country concert at the Rose Bowl.

The three-time and reigning ACM “Male Vocalist of the Year” has sold more than 10 million albums, with each release being certified PLATINUM or better. Aldean’s “most ambitious album to date” (Associated Press) OLD BOOTS NEW DIRT was the first country album released and certified PLATINUM in 2014.  Aldean is in the midst of his “most explosive tour ever” (Rolling Stone) as his headlining 2015 BURN IT DOWN TOUR continues to be hailed by critics as a “game-changing run” (Billboard). The “absolute juggernaut” (San Jose Mercury News) has “people turning out in droves to witness the live version of the man who has been supplying the soundtrack to their lives over the last decade” (Country Weekly). For a full list of upcoming tour dates, visit www.jasonaldean.com.