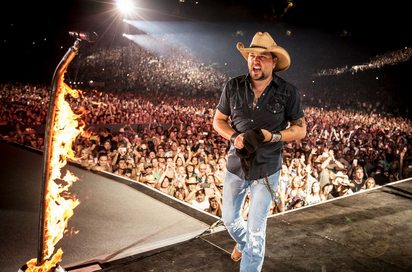 “Standing out there in a sea of country fans at an iconic stadium like Rose Bowl sent chills down my spine,” said Aldean. “It reminds me how lucky I am to be doing this for a living. We’ll do it again at the crack of dawn with the TODAY gang on Friday…I hope to see a lot of people there too!”

The three-time and reining ACM “Male Vocalist of the Year” also just celebrated his 16th career chart-topper marking three consecutive No. one singles off OLD BOOTS, NEW DIRT, which was the first album released in 2014 that was also certified PLATINUM the same year.

In the midst of his “most explosive tour ever” (Rolling Stone), Aldean’s headlining 2015 BURN IT DOWN TOUR is hailed by critics as a “game-changing run” (Billboard) and continues this weekend at Arrowhead Stadium in Kansas Cirty, MO (8/1). For a full list of upcoming appearances and tour dates, visit www.jasonaldean.com.