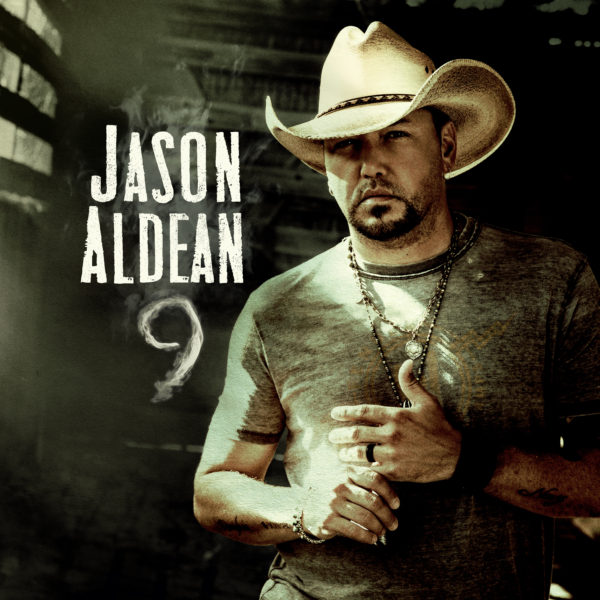 NASHVILLE, TN – Sept. 09, 2019 – After almost 15 years at the top of his format, reigning ACM “Artist of the Decade” Jason Aldean has seen trends come and go. He’s helped bring a few out of the shadows, like a Country-music Columbus making the mainstream’s first contact with hard rock (“Hicktown”), hip-hop (“Dirt Road Anthem”) and R&B (“Burnin’ It Down”). But after all that time, he continues to hold his ground making modern albums with an old-school soul – announcing today that his next effort 9  (Broken Bow Records) will be released Nov. 22. Available now for pre-order at all digital retailers, today fans have access to four new songs off the upcoming album here.

“Early on I always thought if we ever got to make nine albums, I’m going to call it ‘9.’ It was my baseball number growing up, and it’s just kind of always been my lucky number,” explains Aldean. “I remember cutting the first album and thinking ‘that’s forever away,’ and now here we are. I don’t know, it’s really special we made it this far – so, it’s more for me than anybody else – but, it means a lot.”

To celebrate, Aldean offers fans an immediate preview of the new album today with the release of four of its tracks. “Blame It On You” sways with a half-drunk realization that we make our own problems, “I Don’t Drink Anymore” serves a 100-proof hook, “Keep It Small Town” reminds that well-lived lives don’t have to be complicated and the album’s fiery lead single “We Back” rounds out the first-released songs, all out now at all digital partners, with “We Back” also available at radio. To listen, click here.

“When I came into Country music and made my mark, it was with a banger,” Aldean adds. “But we haven’t put out a lot of that stuff over the last couple years. So we got this song and to me it just says what it says: ‘Thought we were gone, but you’re wrong – now it’s on.’”

The three-time ACM “Entertainer of the Year” is a dominant force on the charts, he’s scored 23 Number Ones. He’s the only Country act in history to top the all-genre Billboard 200 four times (in a row, no less), racking up 15 billion streams and more than 18 million albums sold along the way. Aldean’s a card-carrying member of Country’s elite headliners whose incendiary tours are nearing legendary status. His 2019 RIDE ALL NIGHT TOUR will wrap at the Texas’ Rangers Globe Life Park stadium on Oct. 11th before returning to Las Vegas, December 6-8 for JASON ALDEAN: RIDE ALL NIGHT VEGAS at Park Theater at Park MGM. For more information on new music and upcoming tour dates, visit www.JasonAldean.com.