“TODAY WITH HODA AND JENNA” 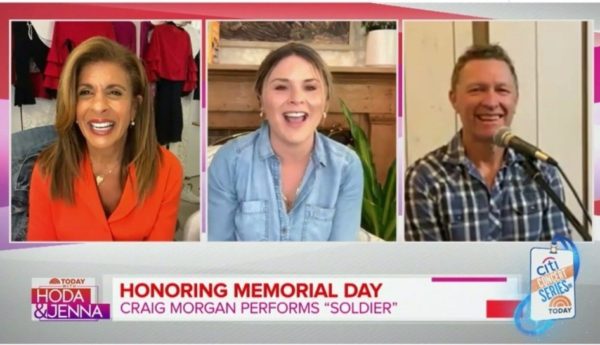 Nashville, TN – (May 26, 2020) — Country music entertainer, TV host and Army Veteran Craig Morgan shared a special performance of “Soldier,” from his just-released “masterpiece of an album” (People), God, Family, Country, during “TODAY with Hoda & Jenna” on Memorial Day. Watch the interview and performance with the 17-year Army and Army Reserves veteran HERE.

– People – “The importance of grasping the good things in life has not only become a priority in the country singer’s day-to-day during these rather uncertain times, but also serves as the lyrical cornerstone of his new album.”

– American Songwriter— “Having the ability to walk through times of suffering with the same vigor as walking through times of good has always allowed this accomplished singer/songwriter to fill albums such as God, Family, Country with songs that effortlessly hit on every single facet of life. This album, in particular, combines five new songs with remastered versions of past hits that continue to tug at Morgan’s heart.”

– Forbes – “God, Family, County is Craig Morgan’s first album in four years and worth the wait.”

– We Are The Mighty – “God, Family, Country pays tribute to his past and his future both in the music industry and in his amazing life story… Craig takes us on an emotional journey that most veterans (and Americans for that matter) can relate to.”

– Country Now – “Though the theme [of the album] sounds simple enough, there’s plenty of diversity within the project. On the same project that finds Morgan exploring new musical frontiers, the singer also tips his hat to fans who may not know his earlier material, or may have come to know him recently through his reality TV show, Craig’s World.”