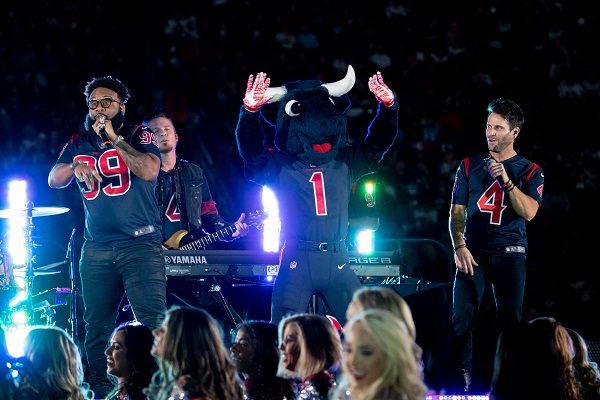 An image from the Dec. 1, 2019 regular season home game against the New England Patriots. The Texans won 28-22.

Stoney Creek Records’ platinum-selling band, Parmalee and BBR Music Group’s Blanco Brown, the mastermind behind the international smash single “The Git Up,” shared the stage during halftime of Sunday Night Football this week. Teaming up for the first time, the two  artists debuted their new collaboration, “Just the Way,” which will be available digitally on Friday, December 13.

Parmalee kicked off the halftime show with their rousing “Musta Had a Good Time” before Blanco joined the Country quartet onstage for the world debut of “Just the Way,” followed by everybody (including the Texans cheerlearders and mascot) launched into a performance of “The Git Up,” which was the top selling Country song in the US for 13 weeks.

“Hearing ‘Just the Way,’ we knew it was a special song. As a band, we just needed that fifth element to help us deliver the message. We’ve been friends with Blanco for a few years now and have been waiting on the right song to collab on,” said Matt Thomas of Parmalee. “Not only is he a great singer but he’s all about purpose, positivity and meaning.  For us, it was a no-brainer to get him on this song.”

“Just the Way,” written by Parmalee’s own Matt Thomas as well as Kevin Bard and Nolan Sipe is upbeat song with a catchy melody that fits the content of the track. The new collaboration praises folks for being true to themselves and encourages self-acceptance with lyrics like, “I love you just the way God made you, girl, he don’t make mistakes. What you call your imperfections I call beautiful babe.”

“I thought the message of this song was so beautiful when I first heard it, “ said, Blanco Brown. “I love the way that it is filled with positivity and celebrates life’s imperfections. I appreciate Parmalee for including me on this track and helping to share purpose with the world.”