With Current Single Heading For Top 20,
“Party Mode” Has Never Been Easier 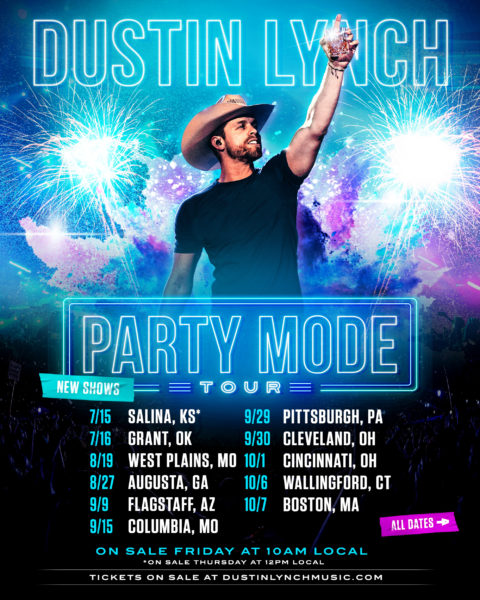 Having hit his spring tour hard – including over 4,000 tickets in Fort Worth, TX, 3,000 in Johnstown, PA, and 3,500 in Avila Beach, CA – Dustin Lynch is kicking his “Party Mode” into yet another gear. With his feel-good outrunning heartbreak single of the same name supercharging Country radio’s Top 25 and climbing, the Tullahoma, TN, native is setting his sights on the heart of the country – and bringing a sense of live-in-the-moment to people ready to let go and have a good time.

“I’ve been so blessed over the years to be able to get out on the road and learn from some of the biggest names in our genre,” shares the record-breaking star. “My band, crew, and I studied with the best and have brought what we learned to our own show, and it’s continued to grow and expand from there. The PARTY MODE TOUR feels like such a culmination of all those years – and then taken to a whole new level.”

With a July 15 show in Salina, KS, added, the man behind the undeniable PLATINUM, six-week #1 smash “Thinking ‘Bout You (feat. MacKenzie Porter)” – which also became the longest-running Top 10 in Billboard Country Airplay chart history at 28 weeks – will sweep through Oklahoma, Missouri, Georgia, Arizona, Pennsylvania, Ohio, Connecticut, and Massachusetts. Tickets go on sale for the hardcore fans – via Artist Presale – tomorrow, June 7 at 10 a.m. CST through Thursday, June 9 at 10 p.m. CST.

“We went into it with the goal of, ‘How do we make something unique and fun for fans that deserve something a little bigger and a little more fun after a bit of a hiatus?’ I think we’ve nailed it,” says Lynch. “The reaction we got from our fans on this first run of shows was through the roof! I can honestly text my friends and family and go, ‘This is the best show by a long shot we’ve ever done.’ It’s just FUN. From top to bottom, I feel like the crowd is a part of the show versus watching us play a show. It’s special.”

With several sell-outs already and well over 45,000 tickets sold this spring, Lynch is a certified headliner. For the Broken Bow Records mainstay, whose BLUE IN THE SKY was released to an American Songwriter cover, major coverage in PEOPLE, Nashville Lifestyles, The Tennessean, and CMT’s Hot 20 Countdown, music isn’t just something to make, but something to share. Hailing from a small town with a strong sense of community, working hard means coming together and playing harder; that spirit has defined Lynch throughout a career that affixes him somewhere between George Strait’s elegance and Brooks & Dunn’s rowdy honky-tonk.

“We knew we needed to keep this party going, so I’m really excited we can announce this next run of shows and keep the ‘Party Mode’ turned up all year,” adds Lynch. “Can’t wait to see you out there!”

Fans can catch Lynch in “Party Mode” all summer long with additional stops at various fairs, festivals, and more. Check out a complete list of tour dates and ticket information, here.