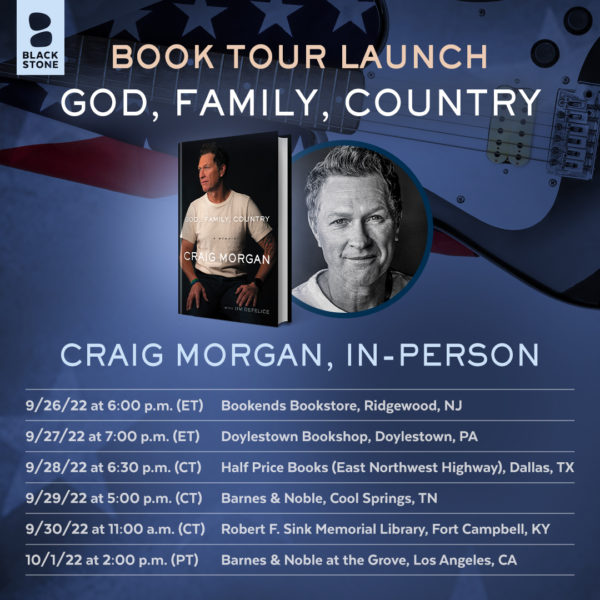 Country music star and Army veteran Craig Morgan will embark on a six-city in-person national book tour next month, personally signing copies of his memoir – God, Family, Country. Fans across the country will have the chance to have the book signed as they learn touching, thrilling and unflinchingly honest, never-before-heard stories from Craig, like his time as an undercover agent fighting sex traffickers in Thailand, his paratrooper training in the Army and combat experiences, or his adventures competing in the survival TV series Beyond the Edge. Find details on how to attend HERE.

*open to military members and their families at Fort Campbell

Releasing September 27 in partnership with Blackstone Publishing and available for pre-order HERE, God, Family, Country, which Craig wrote with Jim DeFelice, #1 New York Times bestselling co-author of American Sniper, details Craig’s road to success, from his humble childhood in Tennessee to his years as an elite military operative to his country music stardom with 25 Billboard charting hits. Country music fans and thrill seekers alike will love this intimate look at Craig’s remarkable life.

An expanded God, Family, Country (Deluxe Edition) album, featuring four new sides including “How You Make A Man,” will release November 11, 2022 on Broken Bow Records and will be available for pre-save/pre-order in the coming weeks.

Tickets and additional information about God, Family, Country are available now at CraigMorgan.com