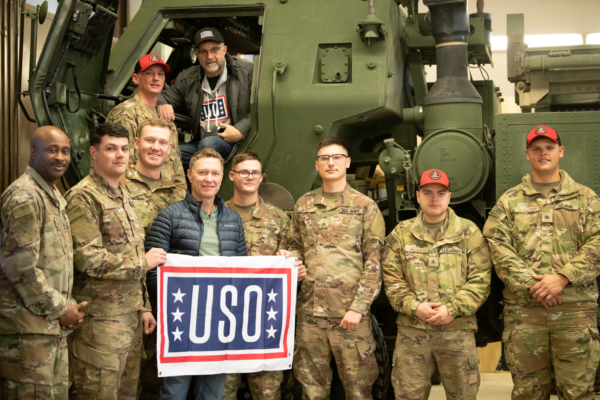 When our service members can’t be home for the holidays, the United Service Organizations (USO) takes home to our service members. 17-year Army veteran Craig Morgan joined the nonprofit on a three-day trip, from December 19 to 21, to Germany where the country music star performed three concerts for troops and their families stationed at USAG Bavaria.

Morgan, who was active duty for 10.5 years and a member of the U.S. Reserves for 6.5 years, was reunited with the 101st and 82nd Airborne Divisions while touring USAG Bavaria, both of which he was a part during his years of service. Since Morgan’s first USO tour in 2002, he has visited 15 countries during 13 tours, entertaining more than 45,000 U.S. troops and their families.

“It’s always an honor and a privilege to visit with our troops and their families, but especially during the holiday season,” said Morgan. “I know how much it means to them to receive those care packages at this time of the year and to hear those messages of gratitude from Americans everywhere who value the incredible sacrifices they make year-round.”

“Serving overseas over the holiday season, sometimes far from family and friends, can be difficult,” said Jennifer Wahlquist, Vice President, USO Global Entertainment. “We’re grateful to the wonderful entertainers like Craig who generously donate their time to bring holiday cheer and a connection to home to our service members.”

“We are so thankful for Craig Morgan taking the time to visit with and perform for our Soldiers and family members,” said Audre Binder, Director, Family and Morale, Welfare, and Recreation at United States Army Garrison Bavaria. “And it’s even more special because Craig knows what it’s like to be away from loved ones during the holidays, as a former servicemember himself. He has just an incredible way of connecting with everyone here.”

Bringing entertainment to the troops is a cornerstone of the USO’s mission to strengthen America’s service members through connection. More than 75,000 service members participate in USO Entertainment tours annually, and more than 50,000 military members have attended virtual celebrity visits through the USO Military Virtual Programming Entertainment Series (USO MVP) during the last two years.