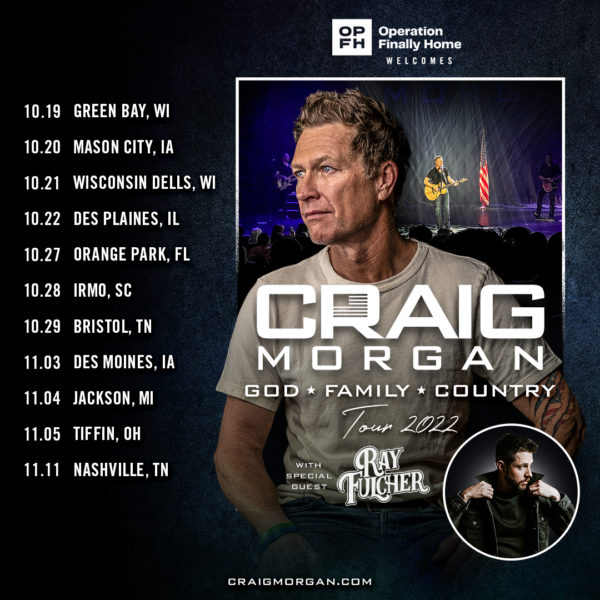 Headlining concert tour will follow the release of his memoir — God, Family, Country – out September 27 on Blackstone Publishing

Country music star and Army veteran Craig Morgan will launch his headlining Operation Finally Home Welcomes “God, Family, Country Tour 2022” with Craig Morgan this fall, playing eleven theater and auditorium dates in October and November, including a very special Veterans Day Show on November 11 at Nashville’s historic Ryman Auditorium. The closing show at Ryman Auditorium will be Craig’s first headlining date at his hometown’s famed venue. Kicking off October 19 in Green Bay, WI, he’ll be joined by country hit-maker Ray Fulcher to open the shows. Tickets are on-sale beginning this Friday, May 13 at CraigMorgan.com and all shows will comply with local COVID-19 guidelines.

“I feel like this tour has been a lifetime in the making,” shares Craig. “Musically and personally, God, family and country are the most important things to me and I’m excited to share this in my upcoming memoir and in my tour as me and the band play some fan favorite songs, some album cuts and some new songs you’ve not even heard yet.”

Craig’s “God, Family, Country Tour 2022” will follow closely on the heels of his much-anticipated personal memoir — God, Family, Country — releasing September 27 in partnership with Blackstone Publishing and available for pre-order HERE. Fans can also catch Craig every Wednesday, competing on CBS’s “Beyond The Edge.” Craig is competing for Operation Finally Home, which provides mortgage-free homes and home modifications to wounded, ill and injured military veterans, first responders, and their families in honor of their service and sacrifice to our country and community.

*Dates subject to change, please check CraigMorgan.com for the latest information. All shows will comply with local COVID-19 guidelines.
**Tickets on-sale at a later date.

Find tickets to see Craig on tour at craigmorgan.com