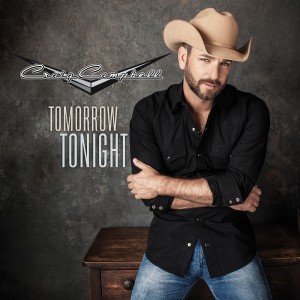 NASHVILLE, TN (June 8, 2015) – Craig Campbell’s highly-anticipated debut single with RED BOW Records, “Tomorrow Tonight,” emerges this week as the 4th most added song at country radio with 42 first week stations. The lead track to his forthcoming third studio album also set a personal record for the singer-songwriter doubling his previous record for the most first week adds of his career.

“Tomorrow Tonight” effortlessly embodies the neo-traditionalist tag he has come to personify. The sexy tune, that captures the fiery rendezvous between two lovers, melds both traditional and more modern sounds in perfect harmony.

The enthusiastic early reviews from critics are pouring in with Taste of Country noting, “It’s a strong vocal performance for a man who slips under the radar all too often.” All Access adds, “Take my advice and don’t wait till tomorrow to add this song, it’s a hit, add it now.”

Produced by Jeremy Stover (Justin Moore) and co-written by Campbell, Justin Wilson and Vicky McGhee, “Tomorrow Tonight” is the blueprint for Campbell’s third studio album due out later this year.

“There are a lot of sides to me that people haven’t yet seen,” he shares. “You can expect some great music with a little more energy and a lot more fire.”

Campbell will be performing “Tomorrow Tonight” live this week at the CMA Fest Riverfront Stage and a special acoustic show at AT&T U-verse® Fan Fair X Showcase Stage in Nashville on Thursday, June 11. He is currently in the studio and will be touring the U.S. throughout the summer. Fans that can’t wait for the stage show can get a behind-the-scenes look at Campbell’s daily life on the road via the star’s popular Craig Cam series. The latest installment, Craig Cam (Episode 2) is live now at: http://geni.us/CraigCam2015Ep2.

Campbell launched on to the Country music scene with the release of his self-titled debut album (2011) delivering the hits “Family Man,” “Fish,” and “When I Get It.” To date, he has logged four consecutive charted hits with over a billion radio airplay audience impressions and over a half million downloads. Acclaimed as one of the genre’s most neo-traditionalist singers, his Top 15 breakout debut “Family Man” was featured on HBO’s True Blood and the top-selling fan-favorite “Fish” has tallied nearly 400,000 digital copies sold. Most recently, Campbell earned his first Top 10 smash with the infectious “Keep Them Kisses Comin’” from his sophomore album NEVER REGRET (2013) produced by Keith Stegall (Alan Jackson, Zac Brown Band) and Matt Rovey (CCMA Album Of The Year Producer). The gifted songwriter co-penned six of the tracks on the twelve-song project as well as Garth Brooks “All American Kid” on MAN AGAINST THE MACHINE. Prior to landing his first record deal, the Lyons, GA native spent time on the road playing keyboard for both Tracy Byrd and Luke Bryan – shows that inspired him nightly. He was soon discovered while playing a regular gig at the downtown Nashville honky-tonk, The Stage. Campbell is now signed to BBR Music Group’s RED BOW Records.