CHOOSING YOU, OUT JULY 29th, IS AVAILABLE FOR PREORDER HERE 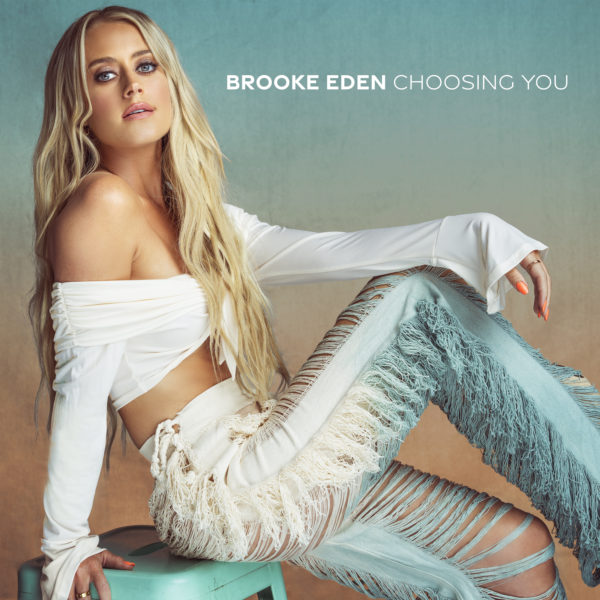 Vocal powerhouse Brooke Eden today releases her brand-new track, “Left You For Me,” available on all digital streaming platforms. Brooke’s first track of 2022 is the debut song from her forthcoming EP Choosing You, out July 29th via BBR Music Group/BMG. The five-track EP follows Eden’s 2021 trilogy of releases, and is a personal statement of love, self-acceptance, and resilience. Listen to “Left You For Me” HERE.

Of “Left You For Me,” the official video for which debuts today on CMT, Brooke says, “Sometimes there’s shame in staying in relationships for too long. I wanted to write a song that celebrates leaving whatever toxic situation you might’ve been in so you can be the best version of you.”  To watch “Left You For Me,” click HERE.

Choosing You, co-written by Eden and produced by longtime collaborator Jesse Frasure, is a five-track account of Eden’s journey to back to herself. One simple question – “what makes you happy?” – spawned writing sessions that acted as therapy for her. In those sessions Eden wrote about healing, learning, love, loss, happiness, and the threads that tie them all together. From the shimmering acoustics and clever wordplay on “Knock” to the driving backbeat of “Comeback Love,” Eden meshes her clear message of assurance with some expert production and toe-tapping musicianship. On Choosing You, Eden is joined by collaborators including Steph Jones, Jon Stone, Sarah Buxton, and Brandon Day. Pre-order Choosing You TODAY at the link HERE.

2. “Left You For Me”
(Brooke Eden, Kyle Schlienger, Jon Stone)

The coming month will prove to be an active one for Brooke, who is set to perform at the Grand Ole Opry on June 3rd – her first at the historic venue since her groundbreaking duet with Trisha Yearwood. Additionally, on June 11th, Brooke will take the Maui Jim Stage at CMA Fest where she will treat the audience to some new music and older hits. More information about CMA Fest can be found at www.cmafest.com.

Over the last few years Country singer on the rise Brooke Eden has carved herself a space in Nashville and has become a force to be reckoned with. Heralded by Billboard as a ‘fiery country star-in-the-making,” Eden has used her personal journey to self-acceptance to create music that is both bold and passionate with the message that it is okay to be who you are. Her new EP, Choosing You, out July 29th via BBR Music Group, flexes Eden’s artistic muscle with unbridled joy stemming from living her authentic life and was produced with longtime collaborator Jesse Frasure (Thomas Rhett, Florida Georgia Like, Little Big Town). She has punctuated this message in the form of a partnership with the RIAA, an open-ended, multi-event-driven campaign designed to show how music can enable our authentic voice, give us purpose, connect us to each other, and give us strength and courage to navigate life’s challenges. In 2021, Brooke came out and publicly embraced who she is as an LGBTQ+ artist. Since making her debut, Eden has shared stages with Country’s biggest stars including Garth Brooks, Tim McGraw, Kane Brown and Keith Urban. Most recently, she made her ACM Awards performance debut, joining Parmalee and Blanco Brown for their platinum multinational No. 1 smash hit “Just the Way.”