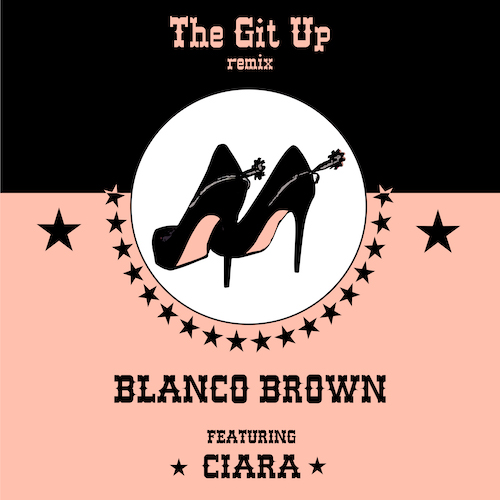 Blanco Brown, the mastermind behind the international smash single “The Git Up,” has teamed up with GRAMMY Award-winning singer/songwriter Ciara to reimagine Brown’s viral hit. “The Git Up (feat. Ciara) [Remix]” is available everywhere digitally now here. The remix features a brand-new verse, written by Ciara and Jasper Cameron, the producer that originally introduced the two artists in 2004.

Ciara and Blanco met early on in Blanco’s musical  journey, in Atlanta, when he was producing records for other artists and have remained friends (as evident in their recent ET Live Artist x Artist interview). Ciara was one of the first supporters of “The Git Up,” singing Blanco’s praises and posting the song to her Instagram. With the remix, the two finally had the opportunity to fulfill their decade long dream of working together as artists. The pair will perform some of it at Dick Clark’s New Year’s Rockin’ Eve—tune into ABC on December 31, at 8pm/7pmCT.

“When I thought about doing a remix, there was only one person that initially came to mind…Ciara,” said Brown. “We’ve been friends for more than a decade so I’m glad we made it happen and happy that my mentor Jasper was a part of it because he taught me most of what I know about the music industry!”

One of the biggest Country songs of 2019, “The Git Up” claimed the #1 spot on Billboard’s Hot Country Songs Chart, for 12 weeks (the longest reign since the chart’s creation) and was the top-selling Country single in the US for 13 weeks. The original track went viral after a social video of Blanco performing the dance caught the world’s attention and spawned nearly 3 billion views and millions of user-generated videos using #TheGitUpChallenge.

Despite being a newcomer to the stage, Blanco has already performed on Good Morning America, Jimmy Kimmel Live!, at halftime during several NFL football games, the US Open and the Teen Choice Awards, in addition to making his Grand Ole Opry debut at the historic Ryman Auditorium. At the top of the year, he will take his debut album, Honeysuckle & Lightning Bugs,  across the country, on the road  with Chris Lane on the BIG, BIG PLANS Tour.

Brown’s debut album, which Rolling Stone says “flexes those storyteller muscles,” is a full-fledged collection of music, jam packed with intricate details, that delves deep into the “TrailerTrap” genre he created. Having wrote/co-wrote and produced every track, in addition to playing many of the instruments, the album takes listeners on an odyssey filled with life lessons, emotional passages and anecdotes from Brown’s life.  Blanco also released a collaboration with Parmalee called “Just the Way” on December 13th. Listen to the track here.