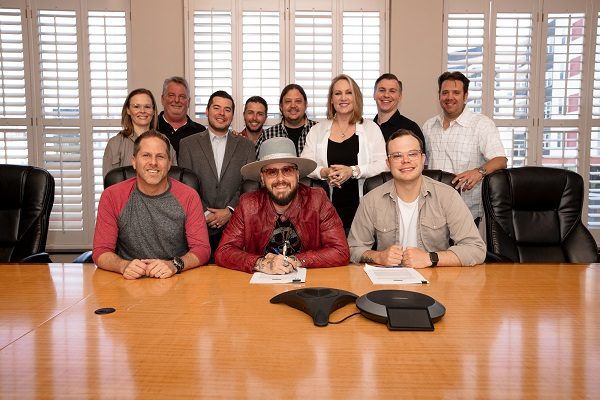 BBR Music Group proudly announced today the signing of Elvie Shane to its roster of artists. The Gospel-born and American Rock-bred singer-songwriter quickly caught the world’s attention as a video of his heartfelt song “My Boy,” (written about his step-son) went viral in 2018. Elvie’s music possesses a unique storytelling ability and sound that bridges the gap between classic and contemporary Country.

“The second that I walked into BBR, I became dead set on becoming a part of their team. There was such a sense of respect and camaraderie between the team and I could tell that we share the same type of values—it just immediately felt like home,” said Elvie Shane. “BBR and BMG always strive to find iconic artists and I feel so blessed to now be a part of their incredible roster. It’s a dream come true.”

“The first time I heard ‘My Boy’ it had me and our SVP of Promotion, Carson James in tears and it garnered the same reaction from many people throughout the building. As we dug in deeper from there, we got to know Elvie as an accomplished writer and storyteller,” said Jon Loba, EVP BBR Music Group. “Seeing our director of A&R, Chris Poole’s passionate belief in Elvie and his unique sound made us even more confident that Elvie needed to be a part of the BBR family.”

With influences that include Steve Earle, John Fogerty and Roger Miller, Elvie has cultivated a custom sound that features rootsy grooves, heavy guitar licks and gospel-ready vocals. Inspired by real-life experiences, Elvie’s lyrics are packed with heart, nostalgia and hardship with a side of food for thought. His first-hand knowledge working in the mills have armed the young talent with an effortless ability to relate to the small town working man and paint a picture of American life in a way that is reminiscent of Bruce Springsteen (one of his idols).

Elvie Shane is booked by United Talent Agency and is signed to Nashville based Rome Phrey Publishing. For more information, please visit his Facebook, Instagram or Twitter.